How to Build Leg Strength with a Resistance Band 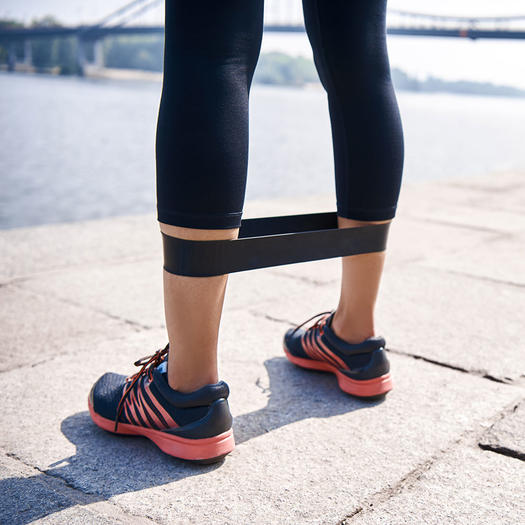 Resistance bands are a solid component of any at-home gym. Not only are they super lightweight (read: they're easy to travel with), they're also versatile enough to work with a whole slew of exercises (these are the best resistance bands for every type of workout). With one little band, you can do a total-body workout, build hip strength, *and* torch your legs and glutes. You can even build upper body strength, too. But when it comes to working the lower half of your body, certain resistance band exercises are more effective than others.

So, the next time you're looking for a killer leg workout, do these resistance band leg exercises as a circuit (back to back with little rest in between) up to three times in a row after a cardio session or within your strength routine. Do the full workout three to four days per week. All you need: a flat resistance band without handles. 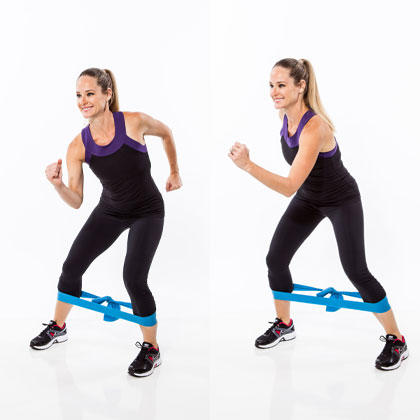 A. Tie band in a loop around legs at shin level (band should be taught with feet hip-width) or use a mini resistance band.
B. In a slight squat, step left foot out to the side as wide as possible, swinging right arm forward (that's one rep).
C. Quickly step right foot out to the right side, swinging left arm forward. Alternate stepping side to side, as quickly as you can. 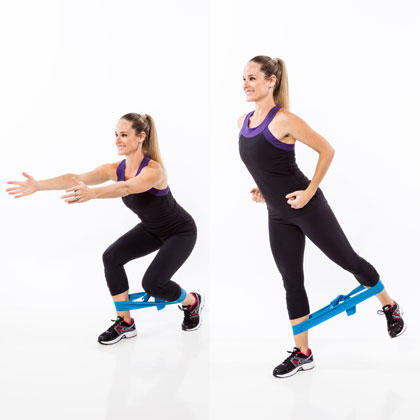 A. With the band still tied at shin level, move into a split stance with right foot forward and left heel lifted.
B. Lower into a squat, keeping weight centered over right foot, pushing hips back, reaching both arms out in front of chest.
C. Stand up, bending elbows back behind body, engaging glutes to lift left leg up behind hip (keep chest upright—don't lean forward). Lower left foot to starting position and repeat. 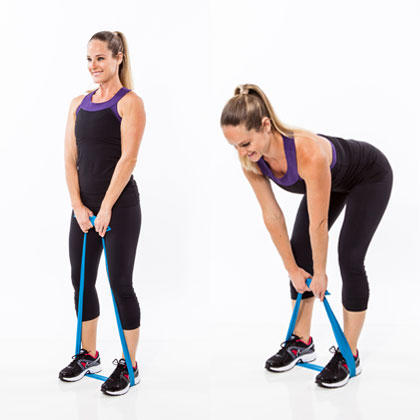 A. With the band tied in a loop, stand on band with feet hip width, holding knotted end with both hands.
B. Bend knees slightly, hinge forward from hips until chest is almost parallel to the floor, keeping back naturally straight and abs in tight. You should feel a slight stretch in your hamstrings in the "down" position.
C. Maintaining straight spine, engage your glutes to bring body back to start position. 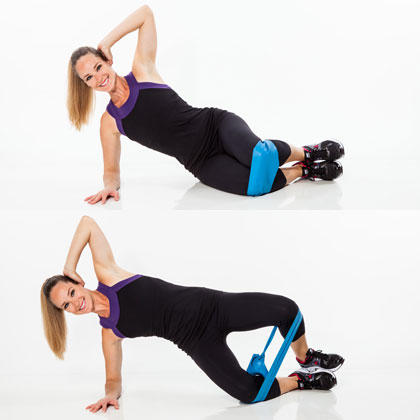 A. With the tied band (or mini band) looped around legs at knee level, lie on left side and prop upper body up on left elbow with knees bent and hips stacked.
B. Bring right hand behind head, flex feet, and brace abs in tight. Lift hips, turning right knee out to side, pressing into band, keeping inside edges of feet together.
C. Lower back to start. Repeat. 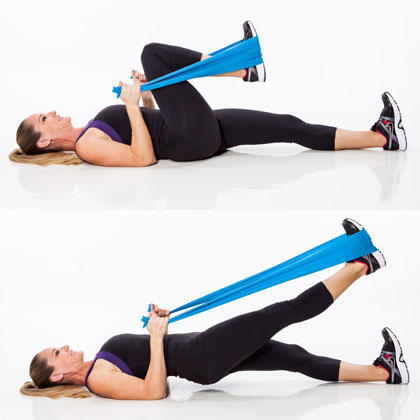 A. Lie faceup with both legs extended, arms bent by sides, holding ends of band.
B. Bend right knee into chest, with right foot in the center of band (try to position band along the arch of your foot so it stays in place).
C. Press elbows into ground and lift hips off floor as right leg extends out straight at a 45-degree angle. Lower back to start. Repeat.