Homer Laffoon, the eldest son of late actress Anne Heche, has filed additional court paperwork this week challenging the legality of an email his mother reportedly sent to ex-boyfriend James Tupper in 2011 naming him executor of her estate.The twenty-year-old claims that the email is not a valid formal witnessed will because Heche did not sign it, and there are no witnesses who also signed it when she was alive. 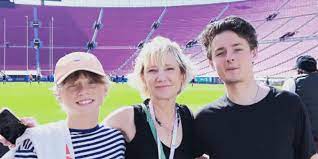 The email is referred to by Mr. Tupper as a will several times throughout the communication. However, according to Laffoon's application, which was obtained by Page Six, the email does not meet the legal requirements to be considered a holographic or formal witnessed will. In light of this, Laffoon asserts that he has the right to be appointed as administrator because he has the greatest priority of appointment. He also claims that his mother frequently sent emails like the one attached whenever she was in a state of ambiguity. Laffoon's mother passed away unexpectedly in October of last year, and he has been locked in a legal battle with Tupper over control of her estate ever since. It is currently unclear what will happen next in the case, but it is sure to be a long and complicated process.