It seems like only yesterday that Leonardo DiCaprio and Gigi Hadid were just two young stars on the rise. But now, it seems like they're definitely a couple! 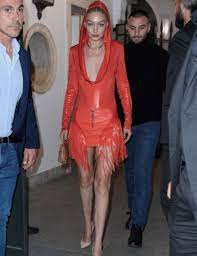 The two were recently spotted in Milan during fashion week, and it looks like they're really enjoying each other's company. A source confirmed to Entertainment Tonight that DiCaprio, 47, was in town with Hadid, 27, and that they're "finally opening their eyes to each other." Hadid was snapped on her way inside a party hosted by the high-end Italian fashion house Versace, but her new boyfriend was nowhere to be seen. On the other hand, DiCaprio was spotted out to dinner with a group of male friends the next day. The actor, who had just split from his long-term girlfriend Camila Morrone, was dressed in all black and appeared to be trying to blend in by wearing a black baseball cap and a black protective face mask. It reminded us of the 'fit he wore when we were first getting to know Hadid at the New York Fashion Week back in September! It's so sweet to see these two stars finally getting together. We can't wait to see more of them together in the future!
Entertainment